As yesterday’s post Student Song Requests has eluded to, I have a Pandora love affair. See also Ongoing Gratitude: Pandora Radio. Having stated my obvious affection for Pandora, I must admit my latest streaming obsession of Irish Pub Rock. It’s an actual station, people.

As Jessica and I chatted and drank Smithwick’s (pronounced SMITT-icks, I learned) at Kieran’s Irish Pub in downtown Minneapolis, Adam Coolong and Geno Carlson of the guitar wielding troupe Wild Colonial Bhoys had me wiggling in time on my bar stool. I sang along to many of their songs due to my Pandora training. Loudly, of course. And how did I know these songs? For about a month and a half, I have started my day with Pandora’s Irish collection as I shower and dress every morning. 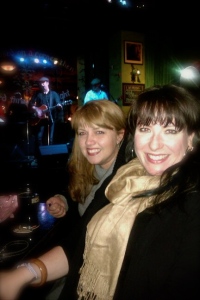 It was my recent attraction to Irish Pub bar tunes and singalongs that served as catalyst to go to Kieran’s. Jessica and I made mischief as we usually do and caught up with each other’s lives from the week as Brent the Bartender served us Smithwick’s for much of the night.

For the last 9 months, Brent has tended bar at Kieran’s. The man loves his job, and he will readily tell you so. When I asked what he likens his job to, he made the analogy of playing the guitar. Just as the fingers need to be in the right places to make the intended sounds, he too enjoys the self-awareness of his movements behind the bar, connecting to his patrons.  “If the fingers are off, sorry to say, that guitar’s gonna sound like garbage.”

But if one hand strums and the fingers find the chords, “music happens and people are happy.” So true, Brent.

Our bartender once had the office job but now prefers F&B for its positive energy and rewarding service in the “sophisticated, professional atmosphere” of Kieran’s.

Jessica and I could tell that Brent had found his occupational fit. What a lesson we can learn from the comfort of finding one’s perfect job.